Five Killer Hacks that give you the Advantage at Work 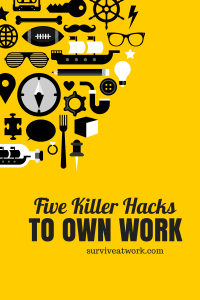 If you want to put yourself at an advantage in the workplace, then check out these fiver killer work hacks:

Rapport is a very powerful platform in any working relationship.  It’s critical for successful workplace interactions, creates a sense of “relating” to someone, and facilitates the building of understanding and trust.  In the working environment, people are far more likely to support or agree with someone they relate to and have rapport with.

You can accelerate a sense of rapport with someone in work by harnessing the power of mirroring.  Mirroring is simply adopting (or copying) another persons non-verbal behaviour (e.g. their posture, the way they move their hands or fold their legs) and speech (e.g. word choice, speech patterns, volume or tone).

The next time you’re in a coffee shop or restaurant, take a look around – you’ll notice couples all over the place mirroring each other… friends who are both sat with their hand propping up their chins and their legs crossed, couples both resting an arm on the table and each taking a sip of their coffee within seconds of each other.  This is because mirrored behaviour is an unconsciously intrinsic demonstration of rapport, trust and comfort.  Those people have possibly built their close relationship over months or years, and now that trust and rapport is demonstrated in their unconsciously synchronised behaviour.

You can take advantage of this relationship between mirroring and rapport by using it to accelerate a feeling of rapport with someone in your workplace.   That’s because, as well as being the result of rapport, mirroring can be used to build it… at a rapid pace.

The next time you’re in a discussion with someone, try out the following.  Be conscious not to be too obvious in your endeavours, as obvious copying will actually destroy support.  Think subtle, and initially allow a brief time lapse between matching any move they make with your mirrored response.  However, the more adept you become, you may find yourself able to move in tandem with the individual you’re mirroring.

Mirror the person’s stance and body position.  If they cross their arms, leave it a while before crossing your own arms.  If they take a drink, a short while later take a drink yourself.  After a little while, try a move of your own and see whether the individual unconsciously mirrors you.  If they have – you’re well on your way to establishing rapport!

Listen to the sort of words the person is using and mirror them.  For example, if the person is discussing someone who she calls “this geezer”, don’t refer to “that chap” or “that man”.  Instead mirror “that geezer” within your responses.

Similarly, play close attention to the mode of speech the person prefers.  People tend to demonstrate a preference for visual (you see what I mean, I looked it over), feeling (it felt right) or audio (that sounds right, you hear me) states.  Identify the state that the person you’re talking to has a preference for and mirror that state in your replies.

Asking someone a favour is one of my personal favourite hacks, because you can use it’s effortless and you can employ it to achieve multiple outcomes.

Having challenges with a workmate or boss who just doesn’t like you?  Simple – just ask them a favour.  Make sure it’s something fairly innocuous (like borrowing a pen or a using a drop of their milk for your tea) which they won’t even think of saying no to.  The brain is a funny old thing and something called Cognitive Dissonance will kick in.  After performing the favour, the person be unconsciously influenced into thinking that they did you the favour because they like you.

If you don’t believe me, check out the study of Jecker & Landy (1969) which showed that a personal request for a favour increases liking!

Need a big favour?  Then start by asking a small one (like above).  The Ben Franklin effect shows that someone who does you a favour is more likely to do you another (and bigger one) later down the line.

The Foot in the Door effect demonstrates that if you get someone to conceded to a small request, they will unconsciously begin to justify that agreement.  The agreement creates a bond and this, alongside the unconscious justification the person’s brain is making on their behalf, makes it more likely that they’ll later concede to a bigger request.

The opposite to The Foot in the Door effect is The Door in the Face technique.  Here you start with a massive request, which the individual is likely to turn down.  You then follow it up with your actual (and smaller) request.  The individual is far more likely to concede to the smaller request after turning down the bigger one.

“Because” could be your new best friend.

Need someone to grant you a favour or accept an excuse?  Simply use the word “because”.  In 1978, Langer et al demonstrated that the use of “because” was sufficient enough for individuals to assume that the reason used was justified and to act accordingly.  In her research, Langer had someone ask to skip the line for the photocopier.  The person was singularly more successful when they added “because…” after asking to skip the line, even if it was followed by something weak and irrelevant like “…I want to use the photocopier”.

4. Fake it until you make it

Lacking confidence?  Feeling sad?  As hard as it might be, the answer is to just fake it.  Pull those shoulders back, hold that head high and fake that confidence; put on a smiley and care-free face and fake that happiness.

Done?  Now keep faking it until you make it.

It might sound far-fetched, but there’s oodles of research out there showing it that faking it can make a very real positive difference.

If you want to learn more about faking confidence, you can check out my book The Shiny & New, Confident You (available here) where I explore the topic in more detail and outline practical steps you can take to make the biggest difference.

There’s an old adage that silence is golden… and it’s true.  In a world where it’s usually considered awkward, silence is a massively powerful tool when it comes to influencing and communicating.

If you ever find yourself in a position where discussion has reached a stalemate, then use silence as your response.  The fact is that most people find silence awkward, so there’s a very real chance that the other person will seek to fill the gap with a compromise.  Similarly, if you ask a question and the answer is incomplete, use silence as your response.  Again the person will unconsciously need to fill that silence with a more detailed reply.

If you want to find out more about what you’ve read above, why not check out these resources.  Please note, I’m not affiliated with these in any way and cannot vouch for their accuracy.

The Emotion Machine – The Unconscious Influence of Mirroring

Foot in the Door Effect

Door in the Face Technique

The Power of Because

Fake it until you make it

The Power of Silence