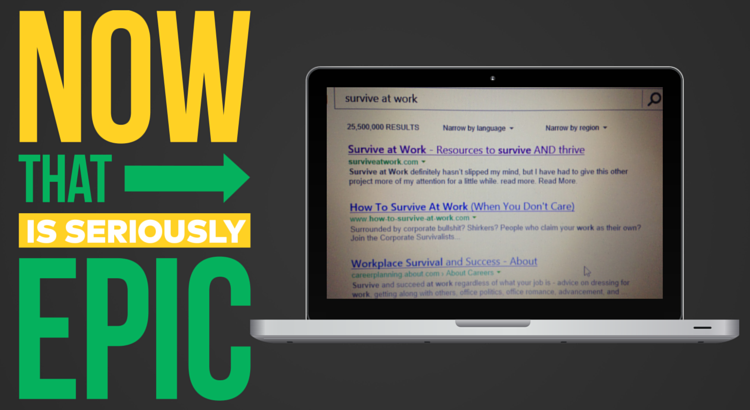 You’ll be happy to hear this is only a short post!

Firstly, I wanted to share some news my friend Greg (remember Mr Greg of the Chicken & Eagle fame?) just texted me… Apparently, surviveatwork.com is the number 1 site listed by Bing for the keywords Survive at Work.

“Well big deal Liz.  I mean the site is called Survive at Work, so you know, it’s hardly a mahoosive achievement of gargantuan proportions“.

Right now, I feel like I’ve managed to land Andromeda I on the moon. Andromeda I – for those of you who are not friends with me on Facebook – is the toilet-roll rocket ship that I built as an economically viable alternative for the recent space taxi contract. Needless to say, Boeing won the contract. But I digress… What I’m trying to say is that I’m very happy in a quite surprised sort of way.

By the way, here’s the proof (courtesy of Greg): 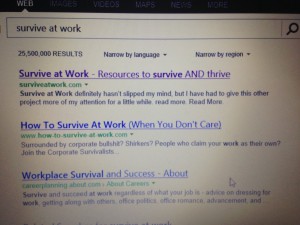 Now that is Seriously Epic!

Now that’s out of the way, on to the real reason I wanted to write this post.

I wanted to share this experience to encourage you to have self-belief and to persevere.

Okay, so I’ve hardly cured a plague or established democracy in North Korea.  But I am starting to accomplish what I set out to achieve.  Something which required me to take a gigantic leap of faith and trust myself (and my skills) enough to take a bold step into the unknown.

I could have decided that I was taking on too big a challenge.  I could have let all those self-doubts take over and listen to the nagging thoughts that told me I wasn’t good enough or that people would laugh at me, rather than my fabulous humour!  But I didn’t.  I had self-belief and I took a bold step.

And now, to some extent, it’s paid off.  After all, here we are… on a site ranked number one out of 25.5 million results in Bing.

Of course, the other side of the coin is that right now, I could be beating myself up about Google.  After all, I’m still not on the first page over there.  Actually, a quick search for Survive at Work as I was writing this, showed that I’m listed on page 9 of the Google results.  Which still isn’t bad, considering that was out of over 163 million results.  But it’s not number 1.

However, that’s where the perseverance comes in.  Yes, I could go all glass half-empty… but my boldness and self-belief has got me thus far and I know it’ll eventually get me to #1 on Google too – it’s simply a case of holding my nerve.

So, that’s the end of my really short (but not as short as I thought) post.

If you believe in yourself and persevere, you can do anything you set your mind to.  You will achieve that thing. So remember… 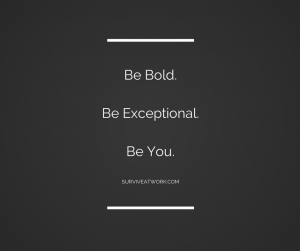 2 thoughts to “Now that is Seriously Epic!”