The Eagle and the Chickens… which one are you?

My friend Greg is a motivational sort of fellow.  So, some time ago, when he discovered that I was low in spirits he got straight to work.

At the time, I had very little confidence in my work-based abilities.  I had got to that place (and you might recognise it) where I had little faith in my capabilities.  Indeed, had you asked me what I was capable of, I’d have probably replied “nothing” – and honestly believed it.  However, motivational Mr Greg sat me down and shared with me a little tale.  Now I want to share it with you…

The Eagle and the Chickens:

There was once a farmer who went for a walk up a mountain.  There, he chanced upon an eagle’s nest containing one egg.  Although he knew he shouldn’t, he decided to take the egg and on returning to the farm, chose to place it in with the eggs of his chickens. 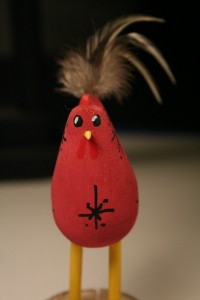 One day, the egg hatched and a tiny eagle was born.  The mother chicken raised it as her own, alongside her little chicks.  The eagle scratched around in the dirt, pecked at grain and scurried across the farmyard with his adopted family and friends.   The eagle grew.  He loved his home and he loved his family, but his adventurous spirit cried out for more.

One day, while roaming around the farm, he looked to the sky and noticed a mighty bird flying regally across the sky.  His mother explained to him that it was a sky bird – something called an eagle.  He wished he could fly in the sky like that – oh, the freedom and adventure!  But he hung his head in disappointment, remembering he was a chicken and that chickens could not soar in the sky.

Each day, the little eagle would stare up at the sky – wishing and dreaming that he could be like the eagle, and fly high in the sky.  His family and friends would mock and laugh at him, for he was a chicken and chickens cannot fly.  Eventually, the eagle stopped wishing and dreaming, resolving to be content with his life as a chicken. He turned his head from the sky and never looked back up.

Finally, after a long life with his chicken friends and family, the eagle died… still believing he was a chicken and never realising he was an eagle.

And the Moral is?

I suppose there’s more than one moral wrapped up in this one little story.  For me though, the most important two are:

2 thoughts to “The Eagle and The Chickens”